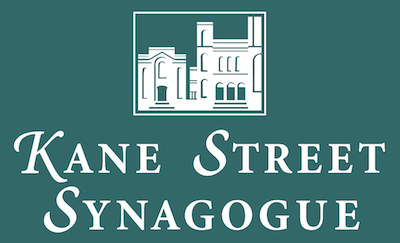 Kane Street Synagogue Hebrew School creates a stimulating and welcoming atmosphere that makes Judaism come alive for children from all types of Jewish backgrounds. We encourage open questioning and strive to help students and their families find their own personal meaning in our rich Jewish traditions.
To register for the 2022-23 Academic Year - please contact Rabbi Val directly at rabbival@kanestreet.org 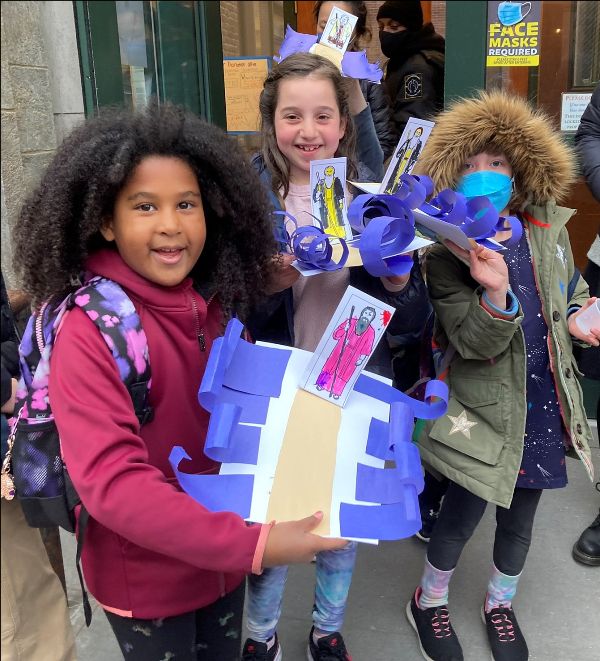 Our Hebrew School education includes two main components: weekday classes and Shabbat services. We also sponsor family activities such as class dinners, social action projects and field trips. Students experience Judaism as a living culture. They graduate knowing about their heritage and feeling pride in their connection with the Jewish community.
We place great emphasis on giving children the knowledge and skills they need to become active participants in Jewish life. Kane Street Synagogue provides an excellent opportunity for children to begin the life-long process of Jewish learning.

Each spring we hold open houses for parents and children to visit our Pre-K, K and Grade 1 classes. Please contact Rabbi Val for those dates or to arrange a custom visit. rabbival@kanestreet.org 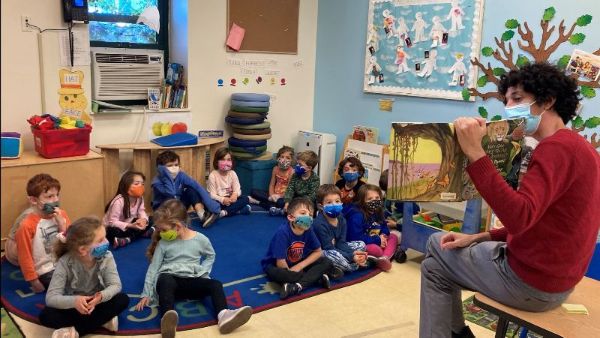 This chart lists the yearly tuition rates for Hebrew School. Tuition can be paid all at once or over several months on a scheduled payment plan. Payment can be made by e-check (no extra cost) or by credit card (additional 3% fee). Please note: Children from non-member households may enroll in our Roshanim (Preschool) and Gan (Kindergarten) classes. Kane Street Synagogue membership is required for enrollment for all other Hebrew School grades/classes.

Find out more about synagogue membership here. Jewish education for children is deeper and more lasting and meaningful when kids see that their parents are engaged in Jewish life too. No one is turned away from Kane Street because of financial constraints. Special dues considerations will be made upon request. If you have any questions concerning fees, please contact Rabbi Val. 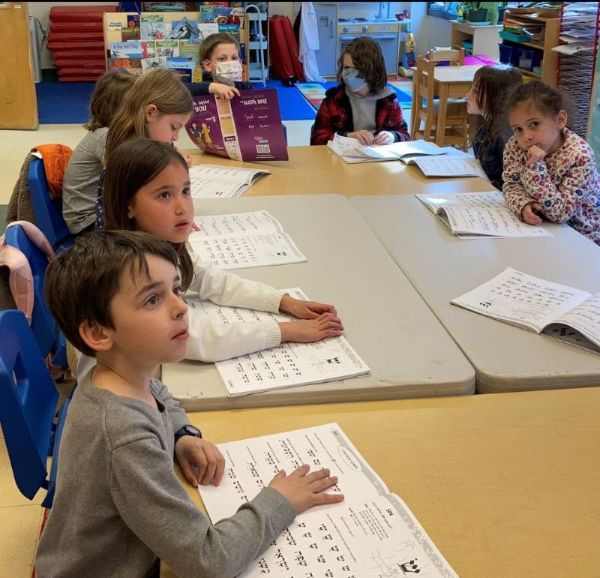 What Makes Our Hebrew School Different?

Our curriculum, leaders and teachers create an atmosphere of fun and engagement while also providing substantive learning in which children are challenged and feel respected. We build a space that feels safe for all kinds of learners, personalities and family backrounds, and we encourage open expression so every child knows that s/he matters and belongs.

Children learn Hebrew as a living language. We emphasize conversational Hebrew in our weekday program. Students learn to speak, read, write and understand modern Hebrew. They learn vocabulary and the basics of Hebrew grammar so that by the time they complete 6th grade, they can translate short stories and speak in full sentences. While they may not be fluent by attending our school two afternoons a week, they certainly have the building blocks to become fluent; they will have the skills they need to speak and understand while visiting Israel.

In addition, during music class in K-2 and in Tefillah session led weekly for Grades 3-6 by Cantor Sarah Myerson, children learn prayer language, melodies, concepts and choreography. These are reinforced at our weekly youth Shabbat services to help students experience prayer coming alive. 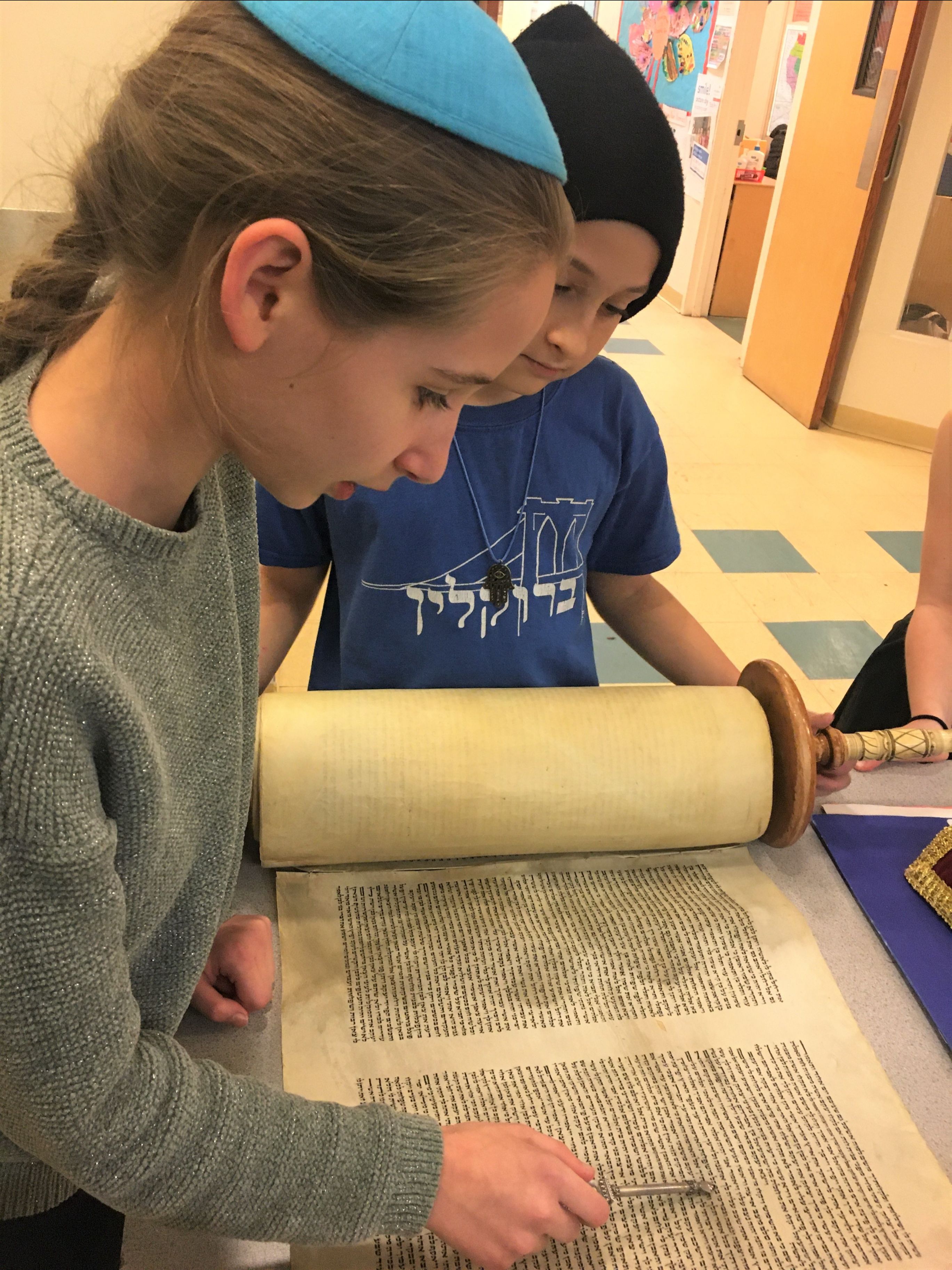 Our students are expected to attend a minimum number of Shabbat services each school year so they may master the words and meaning of the prayers and experience the joy of celebrating Shabbat as part of a community. Parents are always welcome to join our family services where they may learn and pray alongside their child.

The minimum number of Shabbat Youth Services per year for K-7th grade follows:

Every 6-8 weeks we encourage students to try chanting from the Torah scroll during Minyan Noar (our youth service for Grades 3-7). In this KeTeR Torah program (Kids Try Reading Torah, children get to experience reading a verse or 2 from a real scroll and learning the special cantillation melody. The photo to the left shows 2 children practicing. 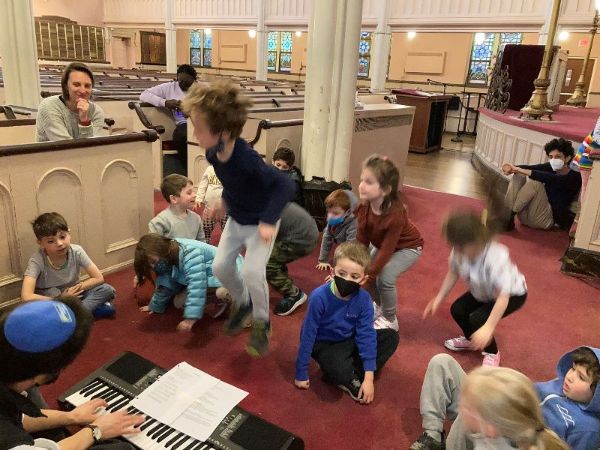 Family education programs are an important part of our Hebrew School curriculum. These optional programs offer families the opportunity to engage in Jewish learning and celebration with the greater Kane Street Synagogue community. All family education programming is open to both our Hebrew School and Jewish Day School families. Most programs take place on Shabbat or Jewish holidays. 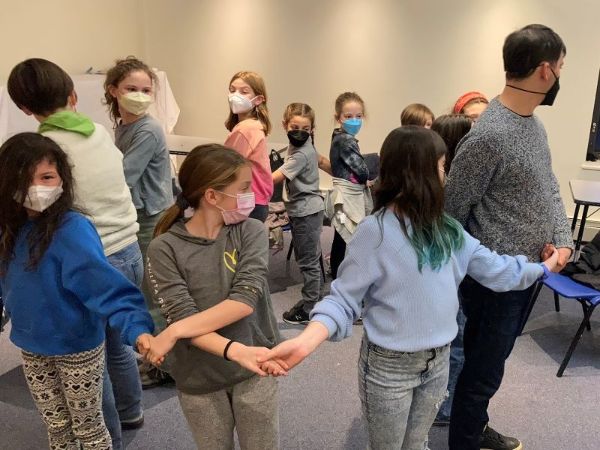 Our teachers are recruited for their passion about Jewish living, rapport with children and creativity. Teachers at Kane Street love teaching here, like the students and the students like them.

Some of our teachers have many years of teaching experience while some are newer to teaching, but each has enthusiastically embraced this calling. Every teacher is actively working to make the learning experience of the children of Kane Street Synagogue Hebrew School rewarding, fun and meaningful.

Our teachers come from a variety of backgrounds: some are Israeli born, some American or Canadian born, some are Ashkenazic while others are Sephardic or Mizrachi (from Middle Eastern countries). Our teachers represent a spectrum of religious belief and practice: many are life-long Conservative Jews, others are Reform Jews and still others are Modern Orthodox. Some resist obvious categorization. It is with deliberate intention that a diverse group of teachers is chosen. As a faculty team they represent a variety of paths to living a good Jewish life. They stand as role models for the children, and with each new teacher, children get to see a different model of authentic Jewish practice and belief. In addition we have 18 tweens and teens assisting in the classrooms. These are teens who grew up attending Hebrew School and aim to help younger children experience the joy of learning they did. These middle and high schoolers are fantastic role models for the children who look up to them.

During the Hebrew School year, the children learn Conversational Hebrew, Hebrew reading and writing, Tanakh (Bible), Holidays, Jewish History and values, Israeli people, places and history, G-d and Mitzvot and much more. Our curriculum is flexible, based on the needs of our students and the strengths of our teachers. Older children learn about the Holocaust, the creation of Israel and do Torah study with traditional commentaries.

What can you expect during Hebrew School?

Walk through the halls, and the first thing you notice is the buzz of activity. Students in our classes are actively engaged in their learning. You might walk into:

Any time you visit, you will hear curious questions, interactive learning, and kids putting new skills and knowledge to use. 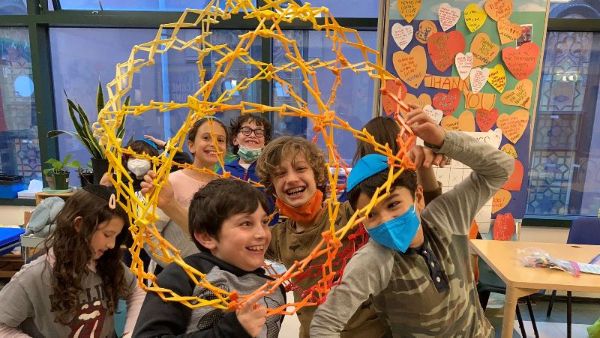 Children at age 4 and 5 build a sense of community and identification with Judaism. They learn songs, hear stories and do holiday, Shabbat and Torah crafts. They learn some basic Hebrew phrases and encounter Hebrew letters to build a familiarity with the Alef-Bet.

Kindergartners learn stories from the Bible and the Jewish values that are at their heart - like hospitality, kindness, courage and determination. They learn the Alef Bet, do hands-on activities to engage with each letter; and they practice writing and pronouncing the letters. Kindergarteners learn holiday stories and customs. They learn about the special people and places of Israel. Children sing and dance, play games and make art.

First graders strengthen their Hebrew letter and vowel recognition, learn a 25-word Hebrew vocabulary, and begin to write in Hebrew (script). Students explore the calendar of holidays, associating each holiday with its major symbols and stories. Students learn core Jewish values and apply them to their own lives and traditional Jewish stories. Children consider what and who God might be. They create art and play games. Students learn Shabbat and holiday music.

Second graders master Hebrew letters and vowels, and become more fluent readers and practice writing in script. They recognize 50 Hebrew words and are able to understand simple sentences. They explore Israeli people, places and culture, and they continue to build their understanding and application of Jewish ethics. Students learn Shabbat and holiday music. 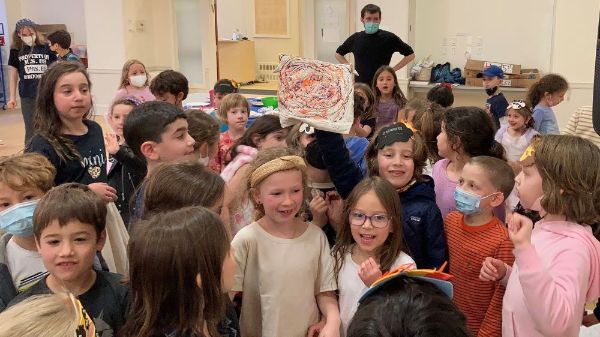 Third and Fourth graders master Hebrew script writing, expand their Hebrew vocabulary. They learn basic grammatical rules, distinguishing singular and plural, masculine and feminine and becoming more confident in speaking Hebrew. Students learn about each of the stories from the book of Genesis and Exodus in third grade and continue learning about the Judges and Prophets from Tanakh. They delve into these stories from many perspectives through discussion, debate, artwork and drama. They learn about tthe rites and rituals of a Jewish life cycle. They learn how to bring holiness into their everyday life and build a vocabulary to talk about G-d. They learn the prayers of the amidah and the closing prayers of every service. Students learn Shabbat and holiday music.

Fifth graders continue to build their Hebrew speaking, reading and comprehension skills using more sophisticated stories. They improve their grammar and build their vocabulary of Hebrew words. Fifth graders master the prayers of the Torah service. Students actively participate in Shabbat prayer and begin to take leadership roles. Students learn about first 3 millennia of Jewish life and history noting the greatest contributions and heroes as well as the challenges and conflicts. They create artwork and sing songs based on the teachings of the most respected sages, and learn about the relationship between Torah, Midrash, Talmud and other formative Jewish literature.

Sixth graders polish their Hebrew speaking, reading and comprehension. They learn how to decline verbs of several binyanim (categories), and begin to master past and future tenses. They learn how to chant the Haftarah trope as they move closer to leading their B'nai Mitzvah. Students learn about Jewish identity in the 20th and 21st century. They consider why Jews at the end of the 19th century needed a homeland, study the early years of Jewish nation-building in Palestine and the creation of the Israeli state. They learn about the massive immigration to the United States from Eastern Europe and the incredible contributions Jews made to American society. Students discuss the difficulties and conflicts of modern Israel as well as its extraordinary achievements. Students also learn about the roadblocks American Jews have overcome, the successes and failures of Jews in America since World War II and how Jewish life came to be what it is today. 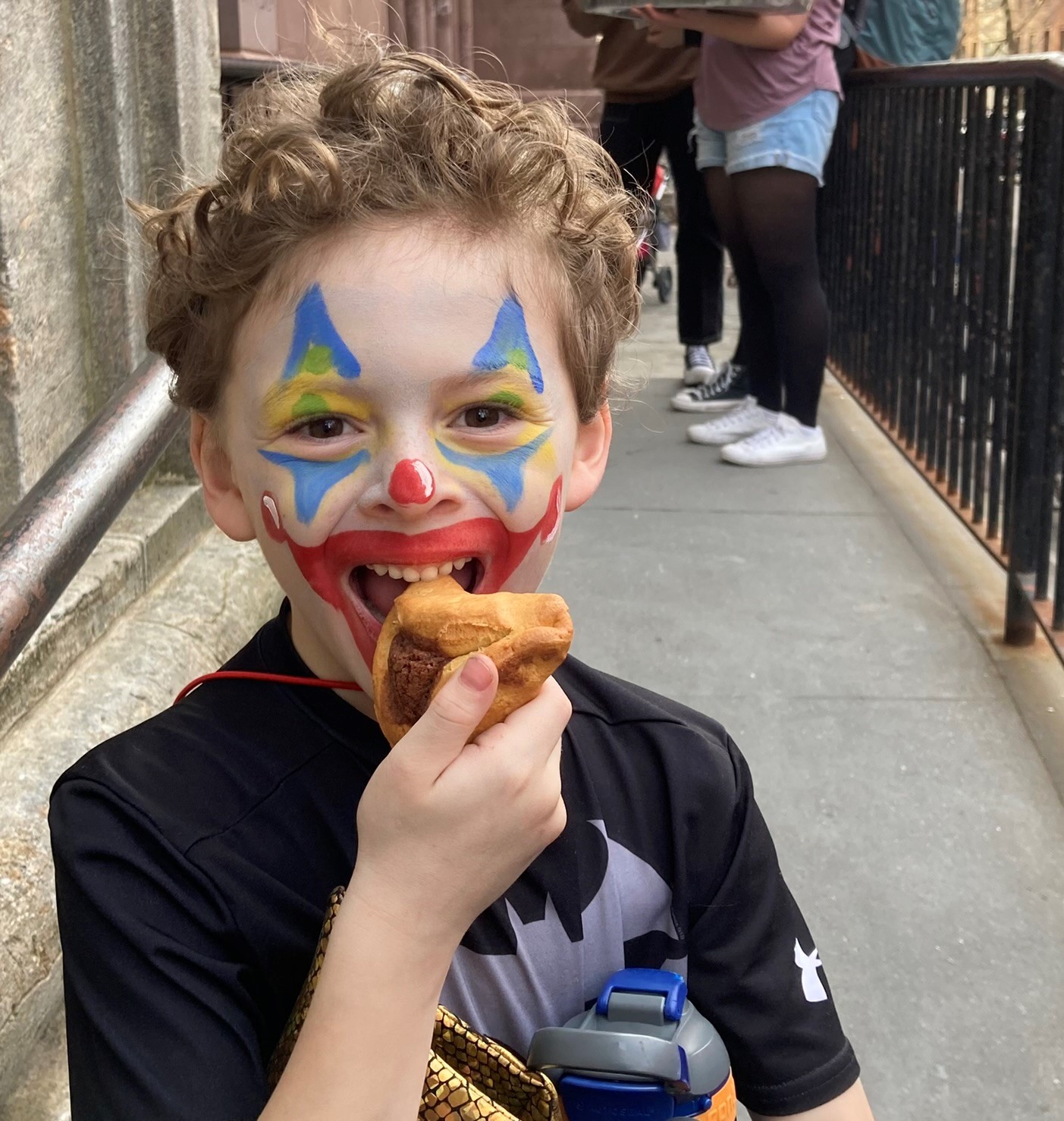 By 3rd grade, children will have developed a basic mastery of Hebrew letters, vowels, reading and writing. By this time some children will begin to accelerate if language acquisition is a strength. Other children may need more attention and will learn better at a slower pace. For this reason, we place children in a Hebrew Group that we believe will be most compatible with their level of ability, interest and motivation. Children are placed based on written and oral evaluations and consultations between the Director and the Hebrew teachers. Placements are not permanent and may be adjusted over the course of the year at any time if it becomes apparent that the student would be better suited to a different Hebrew group. 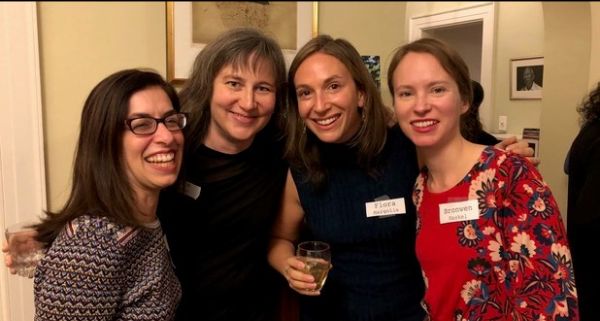 A Hebrew School newsletter is emailed regularly to parents during the school year. It includes the following:

This committee, which reports to the Kane Street Board of Trustees, works with our professional staff to achieve the Hebrew School's mission. The committee is composed of parents of Hebrew School students along with Rabbi Val Lieber. Committee members meet monthly with the educational director to consult on the policies, practices and financial operations of the school. The committee also spearheads fundraising efforts and works to promote the school within the local Jewish community.

“I wish my Hebrew School experience had been like this - my children really enjoy your school.”

“The level of Hebrew reading and understanding of the students is very good—I'm impressed.”

“Your classrooms are so active. Everyone is so busy learning.”

For further information about our Hebrew School, curriculum, or family Programming, please contact: RabbiVal@kanestreet.org or at 718-875-1550.